It is time for another exciting* installment of the Life of Tanya! As it’s a new year, I’ve tried to clean up the mailing list a little – delete multiple email addresses, added some new friends, etc. As always, if you want off the list at any time just let me know – I will not be offended! I am also not offended by the various people who read but don’t look at pics, or look at pics but don’t read, or only read every second or third update.

A handy contents page, for those who don’t want to read the whole thing:

Trina and Adam’s wedding – After Christmas with family in Canberra, I started 2009 in Sydney. I spent new years’ day at a wedding rehearsal and rehearsal dinner (which was a picnic in the park!) and the next day was Trina and Adam’s wedding! It was sooo lovely to be there with them, to be in the bridal party, to wear a pretty dress, and to just generally have fun with everyone! Two days later I was back in Beijing, and after a few hours’ sleep, back at work.

Chinese New Year and Australia Day – New Years’ Eve is traditionally the time for BIG fireworks, and this year was no exception. I was outside at midnight (it was bedlam, of course) then in Daniel’s place with a bunch of people admiring the view of the city’s fireworks from 24 floors up. The 26th of January was a very special day: Australia Day AND Chinese New Year. I celebrated with Bec and Anita – we ate suasage rolls, burgers with bacon/egg/beetroot, and bought a bunch of imported Arnotts biscuits! Two weeks later, Chinese New Year ended with the Lantern festival – and the burning down of a big fancy new building in downtown Beijing. I happened to be driving past before the roadblocks were put in place and saw the buiding half alight! 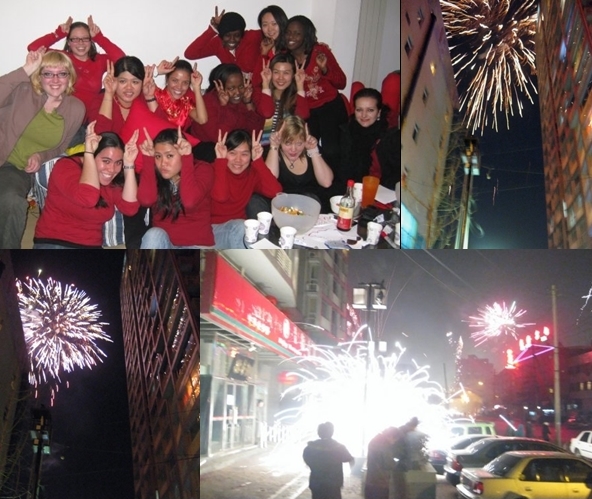 Changing my hair, and changing it again – I spent my holidays doing not a whole lot and it was wonderful. I caught up with some precious friends I rarely see, watched season three of grey’s anatomy, read some books, and…. got a haircut! I now have a thick fringe (which I love) and my hair is above my shoulders for the first time in over a decade. After a few weeks of short blonde hair, I’ve changed it again – now I have short orange hair. I enjoyed my 3+ months as a blonde but it was time to move on. Stay tuned – more dramatic changes ahead!

University City = Ghost Town – One unfortunate thing about Chunjie (Spring Festival – aka Chinese New Year) is that universities have a long break. And since I live in “University City”, everything closed. I mean EVERYTHING. The only places open for three weeks were McDonalds and KFC. There wasn’t even a supermarket open! After four weeks, things started opening up again and I can now buy *food* again.

Hot water – In other Langfang news, my apartment finally has hot water! My landlord bought two electric hot water heaters for my apartment (one for each bathroom). The capacity is enough for a decent length hot shower – nothing too luxurious but after six months of cold water it feels pretty luxurious all the same :)

Snow! It snowed in Langfang this week!! It’s the second snowfall of the winter, but since I was in Beijing last time, this was the first one for me! I marked the occasion by slipping on the ice and falling flat on my back in the middle of the street. I was fine, just rather amused at myself. The snow was mostly gone by the end of the day, but then it snowed AGAIN overnight! Yay!

And that’s it for another update! Hope to hear stories from your corner of the world soon :)

What I’ve been listening to:
Lifehouse – Who We Are
One Republic – Dreaming Out Loud

What I’ve been reading:
Dragons of a Vanished Moon – Margaret Weis & Tracy Hickman
Lord of the Silver Bow – David Gemmell
Let Me Be A Woman – Elisabeth Elliott