Today I went to see a doctor (not my favourite exercise) to check out my ankle. I sprained it tripping on nothing on a dry indoor floor two weeks ago while on a trip to the glasses market. She doesn’t think there’s anything major wrong, but gave me some great Chinese medicine patch things to wear on it. A few hours after starting with it my ankle is actually feeling a bit better.

Incidently, the trip to the glasses market (a trip I’d put off for 18 months) was quite successful, resulting in four pairs of nice glasses. I am so pleased with the new prescription – I knew my astigmatism was getting worse, but I didn’t realise how bad it was til I put on the new glasses and could SEE!

Anyway, I took a cab straight from the doctor up north for youth group. The doorman at the building asked me to wait a few minutes, that there were no cabs right now. After a minute, he seemed to get an idea, and went over to a taxi parked just to the side, told him where I was going and asked if that would be okay. The driver quite happily said, sure, that would be perfect. Having overheard, as I got in I asked if my destination was convenient for him. He said yes, very convenient; he was waiting for a fare to the airport, and since I was going most of the way there it was perfect for him.

Occasionally I meet a driver who has interesting things to say, and a good attitude, that makes it fun to listen and learn from him. This was certainly one of those times. The fluency of that first little bit of conversation led to half an hour more of it. Let me point out now that this post records the opinions Driver Zhao offered, and I certainly don’t share all of them! But I’m always interested to learn more about another person’s perspective on life.

As we drove off Driver Zhao asked whether I understood why he was waiting at a hotel. He explained that if he waits at a hotel, sooner or later someone will want to go to the airport, which is the direction he wanted to go. Driving around on the street, he would have to pick up anyone who waved him down and go where they wanted, whether or not it was what he had planned.

I mentioned that many drivers these days check to see where you’re going before agreeing to take you. Although, as I said, I do understand that choice, given how tight margins are for taxi drivers in Beijing. Driver Zhao happily said “Oh, you see, you foreigners are great passengers. You actually understand how hard life can be for us drivers. German passengers are the best, they give good tips!”

While he enjoys foreigners in general, he said there’s one exception – black people. Insert sigh.  I’ve heard drivers say nasty racist things since my first year here, and I generally respond with something heated about how many wonderful African friends I have in China. This driver answered without anger, simply telling a story of how once, when arriving at an African passenger’s destination (Sanlitun), the man patted down his pockets as if going for a wallet, then dashed off without paying. I still dislike the generalisation, but at least he didn’t start lecturing about how all black people are bad. I’ve heard that rant far too many times and it makes me so angry!

He did say that there are two types of people taxis regularly won’t stop for – black people and Uyghur people (minority people group native to Xinijang in northwestern China). He said the problem with picking up Uyghurs is that they are often aggressive, easily angered. But he said he could understand it, since they come from so far away to a big, modern city like Beijing and see all the things their hometowns don’t have. (I’ll admit I nearly gave up on having a decent conversation at this point, but he shared much more interesting thoughts later on.)

Driver Zhao thinks Beijing is a place that is welcoming to outsiders. There are people here from all over China, and all over the world, and in Beijing it’s okay to be from elsewhere. In constrast to Shanghai, where locals and snobby about outsiders. (Really? Beijing people have no prejudice against people from other parts of China? Interesting idea…)

Driver Zhao enjoys meeting people from other places. He likes being helpful to people who are new to Beijing, to those who haven’t visited their nation’s capital before. He particularly mentioned teaching people to not litter, saying “don’t throw that away here/there, see there is a rubbish bin over there, I’ll even drive you up to it”. He contentedly told me how they would thank him for showing them, saying that they would now know for next time.

He also shared a more negative story. One time he saw two men he described as being from outside Beijing (not sure how he knew) beating a woman by the side of the road. He was shocked – this was so not okay – and pulled over to get out and make them stop, but with words, not fists. Their response was to turn on him and start beating him up. As a former soldier, though, Driver Zhao knew how to defend himself. Still, the fight lasted ten minutes.

Despite having served as a soldier, Driver Zhao doesn’t believe in war. War is never a good solution; regardless of who wins, both sides suffer. In war, he said, it is the poor people who die – whether the army in question is China’s, Japan’s, or perhaps even America’s. It is the poor families whose children go to war; a president’s child will never be on the front lines. When he hears people say they want a war (the implication being a referralto recent problems with Japan) Driver Zhao tells them to go visit a rural area on qingmingjie*; once you’ve seen all the grandparents taking their orphaned grandchildren to visit the parents’ graves, THEN say you want a war.

*Qingmingjie, tomb sweeping day, is a traditional holiday during which family visit their ancestors’ graves, tidying and making offerings.

Although the taxi driver life is hard, not the best money or working conditions, Driver Zhao considers himself fortunate. How else would an ex-soldier from a small town meet and have a conversation with a girl from Australia? These conversations with people from all over China and the world make his life fortunate. He believes in having a positive attitude. How else can one be happy?

Speaking of Australia, Driver Zhao is quite impressed with Julia Gillard (our Prime Minister). He says she’s very beautiful, and is especially taken with her nose. Her voice, too, but he made a bigger deal about her nose. He also thinks she’s done a good job for Australia, that Australia definitely has the better deal in our trade relations with China. Unlike every other taxi driver to have brought her up, though, he made no mention of her marital status or lack of children (and age).

In another surprise, while most drivers counsel me to marry a Chinese guy and settle down here, Driver Zhao showed great understanding of my life “in between”. He said he figured that it would be difficult for me to settle down in any one place – regardless of in which country, or of the nationality of my partner. Also, that whole conversation happened without him once asking if I was married or had children (even though I’d already said I am 30) and no scolding that I should do so ASAP. He did say that if I ever decide to go back to live in Australia, I should start my own trading company so I can return to Beijing frequently. He said I’d make lots of money, because I can speak Chinese and am familiar with Beijing, so people here will trust me. (I’m guessing he hasn’t done much business here…)

Driver Zhao expressed a great love of travel, and we happen to share the same favourite domestic travel destination – Xishuangbanna, Yunnan, in far southern China. Driver Zhao has also travelled overseas – he named Thailand and Singapore in particular. Although he felt the most important thing in overseas travel is to meet people; he thinks the scenery is basically the same!

His last topic was an ode to his hometown – 霞云岭乡 (Xia Yun Ling Xiang); looking it up later I discovered it is a town of 10,000 people not far south of Beijing. Xiayunling is, according to Driver Zhao, a very beautiful place in the mountains. 90% (his figure) of it is forest, which combined with the altitude makes Xiayunling beautifully cool, to the point of wearing jackets in summer. The water is so clear you can see to the bottom of the river. The homes are all the traditional courtyard style, made of good stone. The people there are very honest; you could leave a big wad of cash in the window of your car and no one would steal it. Quite the idyllic spot, it would seem…

He dropped me off with a wish that we might run into each other again one day, and I wished him luck picking up a passenger going a LONG way from the airport… 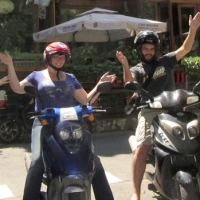