May is a crazy time of year for me. There are graduations and farewells and end-of-year events and all sorts of related stuff. This May I’ve had a bunch of extra stuff too. CRAZY! But all wonderful stuff I’d never want to miss.

Instead of talking about all that, though, I want to tell you about a conversation I had today. I was taking a taxi from a graduation ceremony downtown (Yay Adiel and Chanel and Caleb! And Miles, even if he wasn’t there…) to youth orchestra practise up at the church. (I’ll tell you about the orchestra sometime soon – it deserves a long post of its own!)

It was a 30+ minute drive – lots of time to chat, and my driver was a chatty one. I have the same few conversations over and over with Beijing taxi drivers, but this driver had more to say than most.  I wanted to share some of our conversation with you…

We started off with two common topics: how good my Chinese is, and how great Australia is. I have these conversations pretty regularly. Although this driver did say something lovely about how if you didn’t look at me you’d assume I was from Beijing (not just Chinese, but from Beijing specifically, with that particular accent). And he fixated on a single aspect of Australia – that the air is clean there.

He told me about a high school PE teacher, a woman who played basketball and married a basketball player. I asked if she was very tall and he said she was about my height, but since I was wearing high heels, that puts her at about 6 feet – very tall in China! Anyway, he ran into her in Beijing not too long ago – she happened to get into his taxi. He asked her how she was doing, what she was up to. She’s still working (she’s 71!) but wants to retire to Australia.

We talked about the hectic pace of life in Beijing – how so many people work so hard to make lots of money then have no time to enjoy their lives. We found something to agree on – there’s no point having money if you’re not happy.  He told me that he spends 8 hours a day in his taxi, and makes 5,000-6,000 RMB a month (about $700-$900) – “Enough to live on without any worries, but it’s hard work”. Not a bad salary; it’s not uncommon for entry level white collar jobs to earn half that.

Then he said “I’m 50 now, nearly 51. If I was 20, the ways things are now, I would look for opportunities to go overseas, make a different life for myself. But, you know, I’m not educated. You can’t do anything when you aren’t educated.”  He said that was Mao’s legacy – children without education. My driver was 6 when the Cultural Revolution happened; 16 when it finished. During his school age years many schools were closed, and very few were teaching regular curriculum.

We talked about the high price of houses in Beijing, and the Chinese obsession with owning property. He said the only reason he owns a home is because he was living in government provided housing back in the days before private property. When things changed over, he was given the option to buy the apartment his family lived in pretty cheaply (less than $10,000). If he had to buy his own apartment at market price, he could never afford it.

He asked me if I cook for myself or eat out. I said that I might cook for myself when I’m home, but that’s not often. He told me I shouldn’t eat out, that the small restaurants aren’t safe. “There are no safety and hygiene standards; they could be using any kind of oil.” (He referenced a big scandal from last year about restaurants buying second-hand oil). “It might smell good and taste good but your stomach won’t like it later”. I’m not as careful about food safety as most people here, but I did mention the difference I noticed living in Langfang. I had a lot of stomach problems there; I saw a connection between how much cheap restaurant food I ate and how sick I got.

“Do you know what I eat everyday? I buy some bread, and I eat it with some tea. It’s not very interesting, but it won’t make me sick.”

Well, that’s a snapshot of some of our main topics of conversation. I hope you found it interesting! 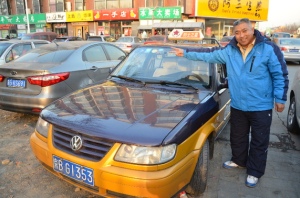