I landed in Chiangmai on Friday afternoon. On Saturday morning I went to Buatong Waterfall with a few Chiangmai families, including some I’d met in Cha-am in April. Buatong is in Mae Taeng National Forest Reserve, about 45km north of Chiangmai. 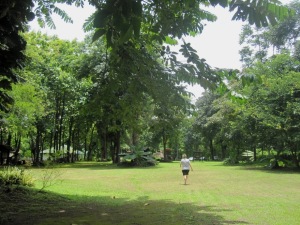 The last stretch of road was a narrow concrete path, which reminded me of the track up to the Akha village outside Jinghong that I visited with my parents nearly two years ago. There was forest all around us – not rainforest, but big trees with a wide, leafy spread.

pool in the stream leading to the waterfall

We stopped in a wide clearing that served as a carpark for the visitors to Buatong. In addition to our group of 3 families, there were two other foreign families, a group of young Koreans, and several groups of Thais – both families and young people. A wide open grassy area beyond the carpark was perfect for picnicking. Closer to the top of the waterfall the ground was moist and covered with bright green moss. We spread blankets and grass mats below a large tree and the kids went off to play while we waited for lunch to arrive in another vehicle. 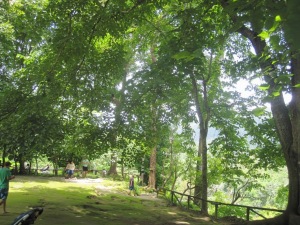 fence at the top of the waterfall

A spring (Rainbow Spring/Seven Colours Spring) feeds the waterfalls, and while we didn’t go up to the main part of the spring, we waded a little in the last stretch leading to the falls. The water was so clear, and cool. It’s not just that we could see easily to the bottom, but there was no colour to the water – it was white rather than blue.

A simple wooden fence stands around the top of the hill where the waterfall begins. There’s a great view across the forest to far away hills. The spring falls gracefully over the rocks at the top and I watched small children happily crawl down the rocks in the water. 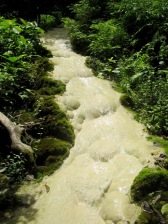 I’d been told you could walk in Buatong Waterfall but it’s hard to believe until you’ve done it. The water is high in calcium carbonate; as the water flows down the hill, calcium carbonate is deposited on the rocks. The white surface that builds up is like scored concrete – non-slip. So the waterfall is a series of rounded steps that you can safely climb up and down.

While the surface is non-slip, anything growing on it can be slippery – you have to watch out for the darker patches of algae etc. I only slipped one time, and that was on a flat surface without running water. While it felt crazy at first, it wasn’t scary and didn’t feel at all unsafe. I worried about overbalancing, not slipping; I could always sit and work my way down on my bottom if I didn’t feel confident walking.

The whole watercourse is surrounded by jungle-like forest, and as we climbed up and down we would go from tree-top height to the bottom of the forest floor (and vice versa). It was beautiful! 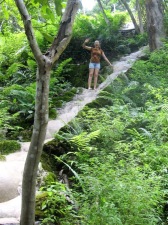 narrow path to the large pool

The waterfall drops down over 100m in three levels. From the top, we climbed down until we reached a little stream, then climbed down to the bottom of the second level. I think the top part is the hardest to climb because the calcium carbonate isn’t as thick so the surface is a little more slippery. In the second stretch there are three main watercourses, a big one, a medium one, and a narrow one. At the base is a wide, flat area covered in water. There are a few deep pools which are fun to sit in. Then the water flows into a channel maybe 1.5-2m across – a series of pools, really – through to the next waterfall.

Again the watercourse splits into several channels. They are very steep falls into a deep pool at the bottom. It feels like you’re sitting on the edge of a sheer cliff, and then stepping off it! At that point, though, we were sitting down on the rocks rather than standing and walking. 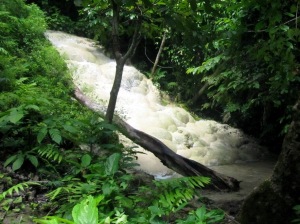 large path to the pool

At the base of the falls the river has been dammed slightly to create a deep pool – probably chest-deep on me. I didn’t stand much though because the bottom is covered with a deep leaf litter which I found quite disconcerting! It was deep enough to swim and float instead. We could stand and sit under the waterfall, and lounge in the water listening to the sounds of the forest. It was so quiet – not even much noise from the other tourists climbing the falls above us.

The climb back up was easy (simple rock-climbing on a non-slip surface of rounded steps). It’s easy to forget how long and steep the climb is, though, until you stop and realise your lungs are fit to burst! Half-way up I realised this was probably too much for my knees – such a pity, though, because I would happily have spent the whole day climbing up and down otherwise. 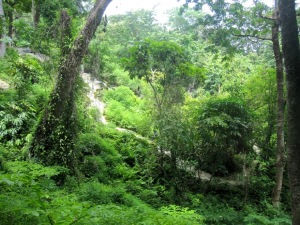 view of the waterfall from the steps

The second time down I climbed the stairs – which were deceptively steep! The first section is made of pieces of concrete scored and painted to look like wooden planks. When this section ends there are very deep earthen steps, with a bamboo pole as a guard rail. A stand of bamboo leans gracefully over the lower section of the path. The path leads down to the wide water-covered area 2/3 of the way down. It was fascinating to see the waterfall from the side – to see its curve down the hill, the white path cutting through the very green vegetation. 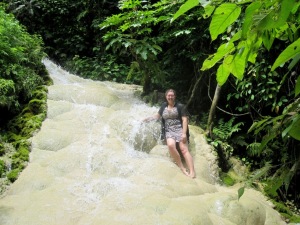 me sitting in Buatong Waterfall

The main reason I took the stairs was to bring my camera down – I got some shots of the bottom of that level, and a few with me in the waterfall, but then my camera was dropped in the water. Oops! So no pics from the bottom section. I hung around the flat with the girls for a while, and eventually made my way back up. By this stage my knees were swollen so that was the end of the climbing for me. I would love to go back again though one day!

Thunder began to rumble around us toward the end of the afternoon, but the rain didn’t start until after we were all packed away in cars and on our way back. My hosts dropped me off at my guesthouse, which took them out of their way and I very much appreciated it. It was a wonderful day – but quite exhausting and I was happily in bed at 9pm :)

I found this clip on youtube that shows people walking in the Buatong Waterfall – gives you an idea of how beautiful and special it is! 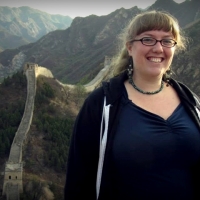 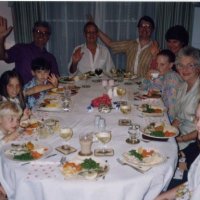