Yesterday (Thursday) was my tourist day. I rarely play tourist in my travels (my touring is more about seeing people and taking part in events) but I really, really enjoyed it on this occasion. 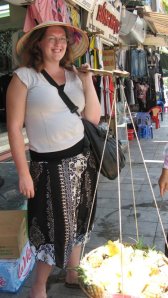 I met up with Beth, a girl I knew in China a long time ago, and together we wandered the old quarter of Hanoi, around Hoan Kiem lake. I enjoyed the narrow streets, with stores that spilled out onto the footpaths. We’d barely set off when a woman selling small pineapples from her bamboo baskets put her hat on my head and her burden on my shoulder and urged us to take a photo – a ploy to sell fruit. Beth took my photo and we continued on our way (sans pineapple) glad that at least she was persistent in a nice way.

It was lunch time, and many shopkeepers sat on little stools on the footpath, eating lunch from bowls. In a couple of stores I saw grass mats rolled out while lunch was served there on the shop floor. In one store a whole family (three generations) sat around various pots and dishes enjoying what seemed a grand feast.

We looked at beautiful lacquerware and stopped for che. Che is a Vietnamese dessert/drink – very sweet and refreshing. There are many different kinds but ours had a sweet chickpea paste, fruit, jellies, large tapioca-ish balls, and crushed ice. Oh! And a whole peeled lychee with a chickpea in place of the pit. We made our way to a little restaurant known for good bun cha. I ate bun cha for lunch both Wednesday and Thursday and would happily eat it all week! You get a bowl of broth with thin slices of vegetable then add barbecued meats, rice vermicelli, and salad greens as you like. I really enjoyed the small eatery feel, so like China. 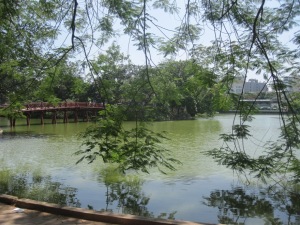 We wandered down to Hoan Kiem lake, around to the red bridge. We crossed to the island/temple, climbed trees, looked at the turtle, took photos, all the tourist stuff. We went round the lake a little further – through a beautiful avenue – before heading to the Water Puppets theatre we had tickets for.

I really enjoyed the Water Puppets. There was a little band playing (mostly) traditional instruments, and they played a little before the puppetry began, which was nice – gave me a chance to concentrate on the music. There was striking similarity with traditional Chinese folk music. I was surprised at how often I saw similarities between Vietnam and China. I hadn’t realised how long China occupied Vietnam – a thousand years, ending in 938. 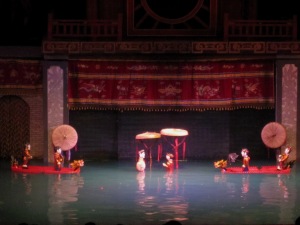 The puppets acted out a number of scenes – welcome drumming, dragon dancing, planting rice, picking coconuts, religious procession, a courting song, horse racing, water buffalo fighting, and more. There was fire involved in a few of the pieces! Very fun. I didn’t realise how deep the water was until the puppeteers came out at the end.

Once the puppets were over we sat in a café with a view over the lake sipping cold drinks, watching the traffic and an afternoon rainshower.

The traffic is made up mostly of motorbikes – I haven’t seen such large streets dominated by them before; shows me just how dominant cars are becoming in China. 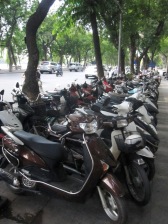 Driving north I saw a colourful tile mosaic alongside the road, celebrating the city’s 1,000 year anniversary last year. Yes, that is one THOUSAND years. Hard for an Australian to comprehend! But Hanoi (Thang Long) traces its existence that far back. The mosaic was amazing – running for kilometres beside the road in a riot of colour, intricate and beautiful designs – children, animals, history, rituals – all sorts.

The next morning as I rode in a taxi to the airport not long after 6am, I noted the presence of water buffalo in the rice paddies alongside the people working in the fields. Some buffalo were just hanging about or eating, but others were harnessed up and pulled ploughs through the paddies. 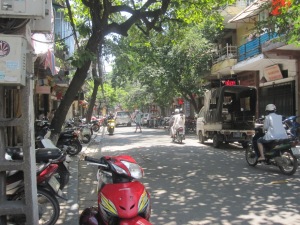 In the Old Quarter of Hanoi

From the air leaving Hanoi I marvelled over the incredible FLATNESS of the huge expanse of rice paddies. I had a wonderful view from the window beside me as the plane climbed quickly in a massive 400+ degree turn. I saw tall buildings emerging from the pall of smoke off to my left as we flew by.

We soon climbed above the smoky haze and clouds, but from time to time I looked down and saw wide brown rivers, heavily forested mountains, flat rice paddies… As we approached Bangkok the cultivated areas became more orderly – each paddy bordered by straight lines rather than thrown together all higgledy-piggledy. Closer still and they became long narrow bands in perfect rows.

I was a little worried about making my connection to Chiangmai but everything went smoothly and quickly and I made it easily. And then the flight was delayed – of course! As we flew north the cultivated areas moved from continuous bright green to dry straw colour, then gave way to forests and mountains. Anywhere there was a river valley the rice paddies returned.

Descending toward Chiangmai I noted the green-ness of the forests that covered the mountains – a colour I don’t expect to see, accustomed as I am to the grey-green of Australia’s gum trees (eucalypts). Also different for me was the way the forest was made up of different trees – different heights, different shades of green, different shapes. As we crossed the mountains I saw plantations of trees amongst the rice paddies, then outnumbering them. They were planted in rows, clearly cultivated, and quite round and dark green in colour. At first I thought perhaps tea, but then settled on their being some kind of fruit tree – don’t know what though.

It was a simple taxi ride from the airport to the Juniper Tree where I am happily settled into my lovely room and ready for my 5 days here in Chiangmai.