These days I am pretty particular about wearing a seatbelt when I sit in the front of a car. I got completely out of the habit in my first year here (2004). Back then many cabs simply did not HAVE seatbelts. Not functional ones, anyway. I would automatically reach over my shoulder to grab a seatbelt, only to find there was no place to click it into, or that the latch was broken. The driver would laugh at me, bewildered as to why I would bother putting a seatbelt on. I tried to explain that in Australia everyone wears seatbelts, to more laughter. To be fair, my Chinese was much more halting back then, but I’m not sure that was the only problem in communication.

When the new fleet of taxis was introduced in 2006 many did have seatbelts (in the front, anyway – the back ones were often tucked out of reach behind covers) but by then I was lazy. Then I moved to Langfang where many of the black cab drivers I used seemed insulted when I used a seatbelt, as if it meant I didn’t trust their driving skills. My worst seatbelt moment was in 2009, travelling with my parents in Yunnan province. We hired a driver to take us from Lijiang to Tiger Leaping Gorge; he told me I didn’t need to wear a seatbelt because I was fat. (I didn’t translate that comment to my parents immediately!)

Now, as I said, I am very much back in the habit of belting up, at least when I travel in the front seat. It still provokes conversations with drivers, but I am no longer bothered by this – and quite happily explain why they should also wear seatbelts. This usually leads to a discussion of penalties – the only thing that prompts Chinese drivers (particularly the professionals) to change behaviour. Of course, most of the taxi drivers have work arounds. They may click the belt into place, but then put the sash behind their back so it won’t bother them. Or, more common, put a bulldog clip on the belt up at the top to hold it in place without needing to latch it – the belt can be laid across the body for the benefit of traffic cameras or watching police without the discomfort of actually wearing it.

Today in a black cab the driver needed to move a little shelf thing between the seats so I could reach the latch. He was surprised at my insistence on wearing a seatbelt. As always, I said that in Australia everyone wears seatbelts, and that if caught without a seatbelt a driver can lose one point from their license. He said that in China it is the same. (China and Australia both have 12 point license systems). This led into a discussion of different aspects of driving and demerits.

When I mentioned double demerits on holidays, he said that the point demerits are too high in China. Running a red light, for example, incurs 6 demerits. He pointed out that if double demerits were used as well, running a red light would be enough to lose a license. He gestured to a traffic light we were approaching and said that he was caught on the camera running the light – he lost 6 points and was fined 200 RMB ($30) – about a tenth of the equivalent fine in Australia.

He asked if speeding was a problem in Australia. I said yes, speeding and drink driving were probably the most common problems on Australian roads. He said that drink driving used to be a huge problem in Beijing, but that it is less so now – people are learning. The only accident I was ever in was caused by a car full of drunk young men. Although since then I’ve seen several RBTs (random breath tests). I saw a few on the highway south to Langfang back when I lived there. Most recently a friend and I went through one on a back road – I presume trying to catch drivers avoiding the main roads. Seemed quite sneaky! Not at all what I would have expected.

Now that I’m living in an area with few real taxis, I am spending a lot of time in black cabs again – so I’m sure I’ll have more stories for you again soon…

** UPDATE:
I recently heard about a new fad for avoiding seatbelt use. Many newer cars have a beeping alarm when the front seatbelts are not worn. I’ve been in cars with many drivers who happily drive along for an hour or more seemingly ignoring the constant pinging noise. Not to worry – you can now get around this annoying noise! With little plugs, inserted into the seatbelt plug to fool the car into believing the seatbelt is being worn. Sigh. (Photos are from a Chinese website calling for these to be banned).

12 thoughts on “Seatbelts in China” 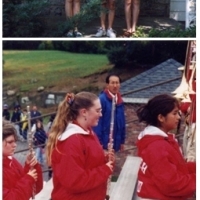