The night I met Xiao Chen I had spent the evening with a family from church. We hadn’t really thought about getting me home til late, and at that time of night it’s almost impossible to find a cab, or even a black cab, nearby. We tried to book a real taxi but none were available. We called all the black cab drivers we knew but none were available. An hour later I called Sheree to ask for phone numbers for other black cabs in our area, but neither of the drivers she introduced me to were available. Then Sheree had a brilliant and generous idea – she walked 5 mins to the hospital where the black cab drivers hang around waiting for fares, even late at night. She found Xiao Chen, who was willing to come get me, and passed the phone over so I could tell him where to go. He had a nice car, a great attitude, drove safely, and wasn’t put off by me using my seatbelt. He even wears his own seatbelt whenever I’m in the car! He takes it off as soon as I get out, but it’s still something I’ve never seen another driver do.

Anyway, Xiao Chen has been my regular late night driver ever since then. He’s always on time, and always happy to see me – no matter what the time is and how much warning I’ve given that I need a ride. One time I missed the last subway going north from the city and when I called he came straight away to get me. Neither of us had change so I gave him a hundred and in lieu of change he didn’t charge me for my next ride. Another time when neither of us had the right change he just told me to pay him next time.

I’ve had lots of conversations with Xiao Chen while he drives me home. I enjoy chatting with him – we have real back and forth, and both learn from each other. He asks questions and is happy to answer mine. I have a tendency to talk about a subject I find interesting well after my listener has lost interest, but whenever I offer an observation to Xiao Chen he follows up with questions and genuine interest.

For example, one night we were talking about the warm, humid weather and I mentioned I would soon be travelling to Cambodia – where it is warmer and much more humid. Somehow that morphed into a discussion about Cambodia, me sharing with him some of what I know about the country. Every small fact I shared was totally new to him, and he was fascinated! Upon discovering that Cambodia is poorer and less developed than China, he asked how that was possible (many Chinese are unaware that China is more developed than much of the world). I tried to explain a little about the Khmer Rouge, despite lacking the vocabulary to do so effectively. As he pulled up outside my gate, he said he would go home and look up Cambodia on baidu (a popular Chinese search engine – used as a verb in Chinese the way google is in English) to learn more about the country and its history. That is a rare and admirable attitude, in my estimation. The next day I rode with him again, and he told me the Chinese name for Phnom Penh (I had been unable to recall it the day before) is 金边 Jin Bian.

The other week was the Chinese holiday duan wu jie – Dragon Boat Festival. About 5 years ago China changed their public holiday schedule. Instead of three 5-day holidays, two of those were reduced to 3-day holidays and extra 1-day holidays spread throughout the year – a day for solar new year (January 1st) and several traditional Chinese holidays, including duan wu jie. I’ve never seen much by way of celebrating here in Beijing, other than zongzi (粽子) for sale. (Zongzi are pyramid-shaped rice dumplings wrapped in bamboo leaves). Xiao Chen explained that duanwujie has always been more of a Southern holiday; inthe north, he said, people eat zongzi but there’s no real significance to the day. He doesn’t feel the need for a day off for the holiday, but hey, no one says no to a day off. He also said that in the north zongzi are sweet, with bean paste or other similar fillings. I’d only had southern-style savoury zongzi with meat filling (haven’t tried the duck egg kind), so this was a surprise to me.

One of the most recent times I rode with Xiao Chen he asked if I was married. This is usually a dangerous question in China, especially when paired with my age – an unmarried woman of 31 is clearly in need of advice, whether she wants it or not. There was no follow up, but a few minutes later he asked how old I am. I was honestly surprised we hadn’t already had this conversation – “how old are you?” and “are you married?” are usually two of the first questions I am asked, right after “where are you from?” When I said I was 31 he reacted with surprise, saying he never would have guessed from looking at me.

As the conversation turned toward the age at which people marry, Xiao Chen said that although most people in China do marry before 30, it’s becoming quite common in big cities like Beijng, Shanghai and Guangzhou to marry after 30. He even expressed a feeling that marrying early was not good for people. I agreed that is wouldn’t have been good for me, but that I know many people who have married young for whom it was a good thing. Xiao Chen got married when he was 24, the legal age for a man to marry in China. When I told him I had thought the legal age was 22, he said it was 22 for women and 24 for men. (I’m pretty sure it’s actually 20 and 22. It was higher a few decades ago, but Xiao Chen can’t be much older than me!)

Finally, I asked how old he’d thought I was, and he replied that he’d initially assumed I was 25-26. As we got talking more over the weeks and he heard about some of the experiences I’ve had he thought I must be older to have fit so much into my life.

That one conversation alone goes to show how great Xiao Chen is!

4 thoughts on “Conversations in the car with Xiao Chen” 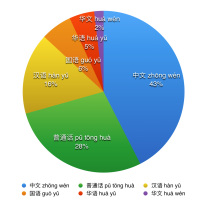