Hello from Beijing, everyone!

So, before I forget, a note about my updates. This goes to over 200 people now, and I don’t expect that you all actually read them all! I know I write copious amounts, and I doubt you all have time to read them all! There is a catch, however – no complaining that you don’t know what’s going on in my life ;)

So I’ve been back in Beijing for a week now. It’s been… a lot of things, but overall, good.

Manda and Andrew drove me up to Sydney last Sunday and after dinner with my sister (she made such good food!!) Trina played navigator and we headed over to Ram’s. I hung out there with him and his flatmates for two nights (including some good cooking, some friends driving down there to say hi, and some late night jamming) and then got on a plane Tuesday afternoon. A few hours into the flight my head tried to explode – courtesy of the cold I picked up in Canberra before leaving… I soon discovered that codeine and constant nose-blowing kept the head-pressure at bay! I did okay the rest of the way.

Getting back into Beijing on a smoggy summer’s day I just couldn’t help but smile – I was home and it was lovely! I relaxed so much just getting back to my city and my compound and my apartment. I woke my poor new flatmate up coming in at 7:30am! We spent the day hanging out and it was lovely. I’m really enjoying sharing the place with her. It’s totally different to living with Christina (who I’m still missing!) but it’s good :)

This week has been full of errands, getting the house (and my life here) in better order. Trips made to and from markets and fruit stands, a visit to the local police station with Bec when she registered at her new address (here!), shoes and bags taken to the guy outside the front gate to be mended, odds and ends left behind by various friends thrown or given away, friends’ new apartments visited, spices consolidated, meals cooked, keys for 3 apartments cut, warm weather adjusted to, sore arms stretched, furniture rearranged, breakfasts eaten every day, photos from home uploaded to facebook, and i’ve even unpacked my suitcases and put them away in the balcony cupboard!

Work wise, I have a few weekly singing lessons set up, and I’m hoping to get a bunch more set up in the next month. My flatmate is currently singing five nights a week at a hotel/spa place down near the temple of heaven. She’ll be home in September and I’ve agreed to do three nights a week while she’s gone. It’s two 45 minute sets with a guy who sings and plays from midi tracks on his keyboard. There’s an hour bus trip each way, but the money ($50 a night) will pay the rent! Plus it’s a pretty low pressured environment to practise performing in.

As for music at church, I sang backup this week – a nice soft start after two months without singing properly, and still struggling with this silly cold to boot! This weekend I’m leading the bilingual and co-leading the English. Then I’m not scheduled for a few weeks which will be perfectly fine when I’ll be singing for the next 4+ Saturday nights… I got all the songlists etc out today which is nice to have done. I’ve even got a full band for BLS (bilingual) for the first time EVER leading there! I have drums AND bass AND guitar AND keys! This has not happened for me before. Granted, the scheduled guitar, bass and keys players were all unavailable, but they all have replacements so it’s okay :)

This Sunday was a lovely day – arrived early for BLS and enjoyed singing in Chinese for the first time in months. Had a lovely time singing backup with a good friend of mine, then after church a whole bunch of us went to a friend’s place where we made toasted sandwiches and someone made brownies with caramels and a guitar was passed around and we chatted and just generally made a fine afternoon out of a rainy day. In the evening the group doubled in size for a trip into the city. We went to houhai (the lake with restaurants and bars) and walked down to Hutong pizza – a pizza place in a hutong in an alley just off the lake. We had a lovely dinner (not a long one – we had to be out before the party of 23 came for their booking!) then had a walk around the lake. It was such a nice day! It really felt like home :)

So what else should I tell you? Adjusting to summer again has been easier than I’m used to. I usually find it harder going to summer rather than to winter. But then again, I suppose I usually come back to Beijing in winter…maybe it’s coming home that makes it easier. The adjustment for my arms is harder – they always struggle in the warmer weather – but I’m getting through alright so far. I’ve come back to the most pleasant part of the year – autumn is about to start, with the wonderful weather it brings. Autumn is the best time of year in Beijing. The days are warm but not hot, there is often a little breeze, and the humidity is bearable. The skies haven’t cleared up yet, but that usually happens on the 1st of September – so here’s hoping!

Hope the weather’s lovely wherever you are :) 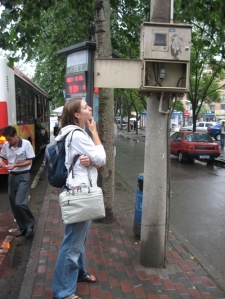