Stefan is one of my Beijing kids; he has been living in Singapore the last two years while doing his compulsory national service there (6 weeks to go!) He was at the airport to pick me up when I arrived despite the fact that my plane landed before 5:30am. We went back to his family’s apartment (he’s living there by himself; his parents and siblings are in the US) and I took a nap. When I got up Stefan made me a delicious breakfast while we talked to two other Beijing kids who are living in different parts of the US. It was a wonderful start to my time in Singapore! (By the way, I forgot to take pics til my last day in Singapore – oops!)

After a lowkey day (we were both pretty braindead) we went out and had a yummy Indian meal for dinner and then went down the road to Udders, who make, among other flavours (including durian, which scented the whole store) alcoholic icecreams. I had a chocolate-orange flavour, and it had an incredibly smooth texture.

On Thursday we had brunch at Ikea and went to John and Katie’s in the afternoon. John’s mum was in town and Jess, another Beijing friend, came over, along with another friend of theirs who is friends with a family from my church in Beijing. It’s truly a small world :) It was a really wonderful evening! Elsa is getting big and her hair is so curly and she has an incredible vocabulary regarding animals (how many almost-two year olds know what a lemur is??) 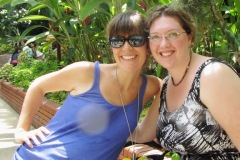 While Stefan had taken my first two days off work, Friday was a sailing day so he had a very long day at work. I visited with Katie in the afternoon, then walked around the Botanic Gardens a little. Katie has raved about the gardens since she first arrived in Singapore nearly a year ago so it was nice to finally get there myself. I went shopping and then met up with Stefan after his long day. We planned to watch a movie when we got home but we basically crashed instead.

Saturday was my last day but was a full one! In the morning we went to Jurong Bird Park (on the other side of the city) with the Sorrell clan. We saw lots of beautiful birds! I had some fun with my new camera, too.

We saw penguins, kingfishers, flamingoes, crested pigeons, peruvian pigeons, pelicans, cassowary, emu, rhea, crimson macaws and macaws of other colours, finches and all sorts of parrots, lorys and rainbow lorikeets, cocaktoos, and huge birds of prey including vultures, eagles and kites – and lots of pretty birds I can’t even put a name to. It’s a really lovely park and I enjoyed it.

Stefan and I went to a teppenyaki place (Japanese food cooked on a big grill) for a late lunch. The food was really delicious! It was my “pre-birthday” meal – we had a mini-celebration of my 30th twenty days early. In the evening we skyped with Kara (in Beijing) and Stefan and Kara sang happy birthday to me :) We’d bought a little “cookies and cream cake” (oreo cheesecake with some sponge, pretty much, and very nice!) there was even a happy birthday pick and three candles (one for each decade) that I was required to blow out. It was a lovely way to end a short but sweet visit.

An overnight flight later and I was back in Beijing! I had a chat with the nice Chinese man seated next to me (I’ll tell you about that later) and was so tired I catnapped the whole way home. After making my way through the longest immigration lines I’ve ever seen in Beijing and a smooth cab ride (my fears of long lines at the taxi rank were unfounded) I was back in my apartment.

I’d been a bit homesick (I missed my bed!! and my kids and my friends) but knew I was stepping into a very busy time – the end of the school year means LOTS of events to be organised and attended, youth ministry-wise, on top of a lot marking waiting for me at school. But it’s always strange being away from my “real” life, and I’ve never been away so long during the school year before so it was lovely to finally return home :)