The first week of October is a holiday here in China. The 1st of October is National Day, the anniversary of the day Mao stood on Tian An Men and declared the founding of the People’s Republic of China. Flags go up everywhere, red and yellow flower pot arrangements brighten every street and complex, and almost the whole country goes on holiday. The great weather we usually enjoy adds to the festive feel.

This year I arrived at October break NOT worn out and exhausted from the start of the ministry year. This is my third year in full time ministry and I think I’m finally starting to get the balance right. The fact that the youth team has doubled doesn’t hurt either! The church hired Dave, who was an awesome volunteer last year, and Kathryn joined us as a volunteer administrator. So Joe and I are both ecstatic about that and things are really exciting ministry wise. There are SO MANY KIDS! It’s great :) Anyway, back to the holidays. I have been able to really enjoy this year’s October break. I’ve seen and done some fun (and bizarre) things and so here are some photos and anecdotes for you!

I’m sure you’ve all heard about the kerfuffle between China and Japan over the Diaoyu Islands (Senkaku Islands). They’re just rocks which happen to have oil/gas deposits under them, but in China nationalist sentiment is running high. Anti-Japanese sentiment is always bubbling under the surface, ready to be awakened. Sure, it’s not the whole country, but enough to present a problem. You may have heard that there were large protests outside the Japanese embassy here in Beijing – which happens to be directly across the road from the 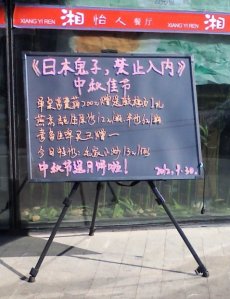 hotel/theatre where the largest international church in the city meets (where I used to work years ago). In fact, church was disrupted one weekend when all road access for a block or two was closed to vehicles – people going to church had to park far away and walk. I was down there the other week picking up some things for the upcoming youth camps and was surprised to see row upon row of riot fences surrounding the embassy walls, and other crowd-managing fences up everywhere. No people, though.

This is all pre-amble, though, to the photo I want to share. On Saturday I was taking a walk in my area, soaking up the sunshine and the CLEAN (even by WHO standards) air – the sky was blue all the way to the horizon! And then I walked by a Chinese restaurant with a sign out front. There were a list of specials for the Mid-Autumn Festival and things like that, but the very top line surprised me enough that I had to stop and read it a few times to be sure I wasn’t making it up. For those who can’t read Chinese, it says: “Japanese devils, keep out” (technically, forbidden to enter, but you get the idea).

A few days later a friend and her daughter invited me to join them on a trip to Ikea. It was surprisingly uncrowded for a holiday – it’s crazybusy on weekends – and we found all the things we were looking for. But the crazinest moment of the day came before we even got inside. Parked by the side of the road, right next to the fourth ring road, a car was on fire. No police, no firefighters, no one standing around looking upset, just a car on fire. And I mean SERIOUSLY on fire. It was a big car-shaped fireball. You could see the charred frame of a car in there somewhere, sometimes. A huge plume of black smoke rose from it and the heat as we passed by was intense, even inside our car (with no windows or doors open). I didn’t get a good picture, but here’s one to give you an idea. Shortly after I took this we saw twisting columns of fire on this side of the car – I guess the wind changed? I kept the cyclist in the picture because I love how she’s just pedalling past, nothing unusual here…

Jankovic and Suarez Navarro on the Lotus Court

Another really fun thing I did during the holiday was visit the China Open! I’ve thought about going to this annual tennis tournament before, and this year was really thinking about it when a friend called and invited me to go with her and her husband. We’d planned to go Tuesday but pushed it back a day because her favourite players were on court then. (We had foot massages on Tuesday instead!) The best thing about waiting a day is that the air cleared up – from being over 300 on Tuesday night it dropped in one hour early Wednesday morning all the way back into the healthy range. Yay! Anyway, my friend picked me up at home and bought tickets on the street out front of the stadium. It looked like we might have a problem for a minute trying to get in, but then it was all good. We grabbed some food and went to the Lotus Court – this is the court I saw wheelchair tennis on during the Paralympics in 2008. A new stadium has been built since then so this is now the second court. We watched Carla Suarez Navarro beat Jelena Jankovic in two tightly contested sets (Suarez Navarro was down 3-5 in the first set then won 6 games in a row!) 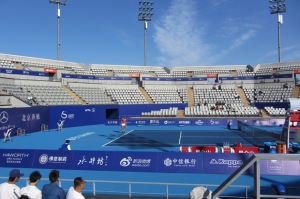 After that we moved to the Moon Court – a court open to anyone with a ground pass. No assigned seating + Chinese aversion to sunlight meant we got our pick of seats. We chose front row seats on the corner – so close to the players we could hear every noise! We saw the third set of a match between Makarova and Hercog, then a ladies’ doubles match in which one player was Taiwanese and the crowd sentiment was definitely with them! They lost in straight sets, however, to their seeded opponents. By the end of their match the lights were coming on, the air was cooling off, and the court was filling up a bit more. It was time for the match we REALLY came to see – Mike and Bob Byran, joint world number one doubles players (and twins) from the US.

Sitting in our great seats, with the Bryan brothers warming up in the background

My friend had seen them play before and really enjoys watching them. She came prepared with flags and everything. There were several US flags and several Spanish flags, too – the Bryan brothers were playing Lopez and Andujar from Spain. It was a really entertaining match. Lopez had a pretty wicked serve and both teams pulled off some amazing shots. The Bryan boys won it in straight sets all the same. It was a really fun day! I think I’ll go back again next year :)

In addition to all this fun stuff, I’ve been able to spend time with a few friends, do some cross-stich (finally started the third panel of a three-panel design I’ve been working on for about a year), house/dog-sit for a few days, and hang out with a few kids. So it’s been a full few days but very fun!

2 thoughts on “October Holiday in Beijing”