Two years ago my flatmate turned 30, and her mother travelled to China from Australia to surprise her. At the time I thought that was such a lovely thing – how great it would be to celebrate such a milestone with family. I was about to travel to Australia at the time and it occurred to me – why not ask? So I told my family that I would really love to have them come to Beijing to celebrate with me when I turned 30. Apparently there are some recollections of me demanding that they come, but I don’t remember it that way at all!!

I really didn’t think they’d all be able to make it, but in July (6 weeks after my 30th birthday, during the closest Australian school holidays) my parents, both my sisters, my brother-in-law AND his brother all came to Beijing and we had a birthday party with about 30 Beijing friends. Being July a lot of people were gone for the summer, but enough remained for a truly wonderful evening.

The group arrived in four different lots, and so they didn’t all do the same things in Beijing, but it was a really great time all the same (and then we travelled together to Guangxi Province, but more on that in another post).

Natasha, Dante and Dario arrived on a Sunday, and several of the big tourist attractions were visited over the next few days. While my parents and sisters have been here before, it was the boys’ first trip to China. The three of them quickly mastered the Beijing subway, and took themselves to Tiananmen Square and the Forbidden City. We also visited the Summer Palace together, along with Nick.

Carla arrived after a few days with friends of ours in Shanghai just in time to travel to the Great Wall, Nick and two other friends joining us for the trip. I had a van drop us off at Zhengbeilou, further east from Jiankou, a completely unreconstructed section of the wall. My knees weren’t doing too well, so after making sure they were on the right path I headed back to the van, and the driver and I went to Mutianyu to pick the hikers up at the other end.

Meanwhile, the intrepid hikers discovered that the path to the wall was much longer and more difficult than we had believed. They eventually made it to the wall and were rewarded with amazing views. They climbed to Niujiaobian, nearly 1000m above sea level, and headed back down to the reconstructed section above Mutianyu. Unfortunately, a rain storm blew in and they took cover in guard towers. The delay meant they missed the last cable car down and had to walk another half an hour to the car waiting at the bottom.

In my three hours waiting at Mutianyu I wrote the outline for a new bible study inspired by some C.S. Lewis I was reading.  Then I got talking with two American grad students who were trying to escape a shady black cab driver. I offered them a lift back to the city since we had plenty of space in our van. 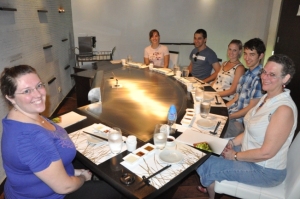 After dinner I went to pick up my parents at the airport. The next day we went to an amazing Japanese restaurant for a family meal – it was a lot of fun! Great teppenyaki and sushi and sake… yum! The girls went shopping and bought pretty things and then we all went to see the acrobats at Chaoyang Theatre. It was a new show – not the one I’d seen at least 3 times before (although each time is a little different and I always enjoy it). There was less dancy fluff and some new acts, including motorcycles riding around in a steel cage – a fitting finale.

The next day we visited the tea shop at a local Chinese market, where we sat and sampled various high quality Chinese teas for over 2 hours. We tried two Pu Er teas, several Long Jing greens, Rose and Chrysanthemum, Gui Hai Oolong, Tie Guan Yin green tea… and probably more than I’ve forgotten. Everyone had different favourites, and the store owner definitely enjoyed us! Her little daughter took a shine to Carla (not a surprise) and was distracted from her lunch wanting to play. In the end there were a lot of purchases, including tea pots and cups and multiple teas, and they gave us all a free tin of White Tea, a variety that I had not tried before.

After lunch most of us visited my nail salon, where the girls got fancy-shmancy manicures and pedicures, and the boys got foot massages. We all met up again at Peter’s for my birthday party, which was a really fun night! There were margaritas (with and without alcohol), lots of food and fun and laughter, a wonderful Melinda-made cake, and some fun stories. 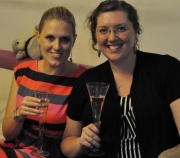 The family came back to my house afterward for a game of “Oh Hell” and some champagne.

The next morning was the Temple of Heaven – quite the gathering spot on Saturday mornings. My 4 siblings found the harmonica orchestra I’d come across previously, along with many dancers and exercisers, but the highlight was a group of older Chinese men doing stretches and gymnastics. Natasha imitated one of their stretches, at which point a gentleman came over to “fix” her technique – making it more painful in the process, I’m sure! Dante got into a competition with a man doing turns on a high bar, and they were all taught a leg-fighting game. Dario went up against a small older Chinese man and was promptly toppled over a short wall.

Next followed lots of shopping (despite the disappointment of finding the knock knock market closed) and while the girls continued to shop the rest of us visited the “Beijing Planning Exhibition Hall”. I only heard about it recently, and it was a bit of fun, lots of displays of the city of Beijing at different stages of development. In one huge hall I found all the different places I’ve lived in Beijing (and we photographed us pointing to them).

That night we had hotpot at Haidilao, probably my favourite Chinese restaurant at the moment. On the way home we dropped by a local community hangout where scores of locals gather in the evenings to dance and do other group things. It’s like a village green, but in the middle of the concrete suburbs. Sunday we went to church and had Cantonese food, and the girls did even more shopping.

Then our Beijing time was finished – we left early Monday morning to travel to Guangxi province, and the famous tourist town of Yangshuo…

2 thoughts on “China Travel 2012: Beijing with the family”