I first visited Jiuzhaigou National Park in China’s Sichuan province with my parents in October 2009. I wrote about it and posted photos back then and thought there probably wouldn’t be too much to add my second time around. I was wrong… but I am going to do my best not to cover the same things I did last time. If you want more information about the park and facts about its attractions, I suggest you refer to the post I wrote back then . I added a lot of photos on facebook, so again, if you don’t have facebook let me know and I’ll send you a link to see the photos without it.

I was surprised at how different my second experience was! Esther and I visited Jiuzhaigou in early summer as opposed to Autumn, so there was a big colour difference – more lush undergrowth and bright green everywhere. We also travelled the park in a different order, and visited a few lakes my parents and I skipped on our trip (we ran out of time). It was a LONG day of walking 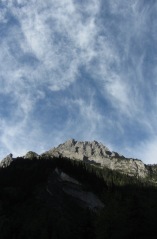 around the park (we spent nearly 10 hours there) but my knees held up surprisingly well! The walking stick was very much worth having. We also did very well weather-wise. All week I’d been checking the forecast and rain was predicted, but on the day it was beautifully clear and sunny. I actually got a little too much sun!

I joined the line outside the ticket office maybe a minute before the doors opened at 7am. We took a small bus to the top of Rize Valley. My parents and I started with Zechawa Valley and I probably would have done the same thing with Esther but I was told there were no buses running up that valley so early in the morning. I’m glad it worked out that way, though, because it worked out beautifully. My parents and I hadn’t seen much of Rize Valley so it meant I started the day seeing new things :)

We started at the top of the valley, with a quick look around at Sword Rock. The sky was beautifully blue with a hint of cloud and the forested hills were so vibrant in mixed dark and light green (pine and deciduous). We skipped the “primeval forest” walk and took a bus down to Swan Lake. There was no one there but us – the only time that happened all day. The air was still and the reflections on the water were incredible!

We had a look at Eagle Claw Cave on the way to the bus stop, then rode down to Arrow Bamboo Lake. The reflections on the water were incredible – difficult to believe! So many tourists that it was quite a task to get an open space for photos, though.

Next we took the bus down to Panda Lake. Again, gorgeous reflections, but we were quickly drawn to the path leading down the Panda Waterfalls. There was a lovely roar of rushing water, and mist off the falls drifted a long way. At the base of the falls the wooden paths continued downstream through beautiful forest until it wove its way down to Wu Hui Hai. 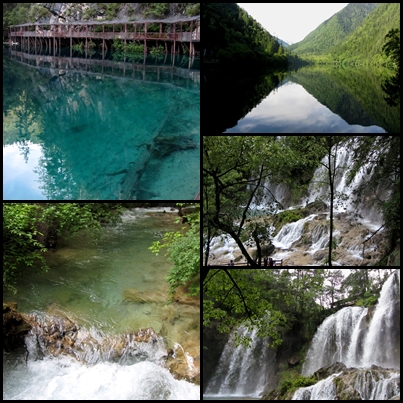 I hadn’t see Wu Hua Hai from that angle before, and we walked all the way around to new viewing platforms that had been built since my visit in 2009. The colour was incredible but it took me a while to work out why it looked so different – the deciduous trees were all green, not yellow, and this changed the colour of the area, including the reflections on the water.

We rode back down Rize Valley without stopping at the other scenic spots there, then up Zechawa Valley to Chang Hai (Long Lake). This was the first spot we visited in 2009, but it looked very different to me on this trip. I think it was partly the time of day – the light was hitting the water at a different angle – but also, there were a lot of new walkways built since then. We could view the lake from higher up and then walk further around, to a spot where the water was shallower and more turquoise in colour. Despite being summer there was a still some snow on the highest peaks. Once we reached the end of the path we stopped for a quick lunch break – hard spot to beat! Turquoise water, green trees creating a shady space on a clear, sunny day… lovely!

Next we walked down another new walking path to Wu Cai Chi. This is the 5m deep “pond” with incredible colours that stunned my parents and I so much on our 2009 trip. If anything the colours were even more vibrant this time. When we stepped up to the railing to take some photos a light breeze started, gently rippling the surface of the lake. At first I thought there must be something wrong with my eyes because it made the lake look blurry, but as the breeze grew a little stronger it was obvious what was happening :)

The walk through the forest on to the bus stop going back down Zechawa Valley was different from the last time – all lush summer growth rather than the more sparse birch trees with fallen leaf litter look I remembered. Once back at the intersection of the three valleys, we stopped at the tourist centre and bought a few souvenirs and drinks before heading into Shuzheng Valley.

The first stop is Nuorilang Waterfall. This long waterfall is caused by water cascading over the edge of a plateau, so despite being only 20m tall it is over 300m long. The sound of the water carries and sounds beautiful. By the time we reached the end and continued started the path down through the forest  to the next bus stop, I was pretty sure that the river was more full than last time. 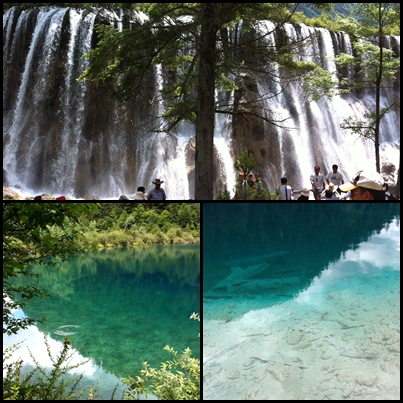 We drove down to Rhinocerous Lake and then Tiger Lake, taking photos of the reflections, the beautiful blue water, and the calcified trees beneath the surface. I can never get over how clear and how blue the water in Jiuzhaigou is!

Next we walked down alongside Shuzheng Waterfall, down through the ribbon lakes, and on to Sparkling Lake. It was just as peaceful and beautiful as I remember. The wooden paths weave through the water and forest by the lake’s edge and give wonderful views, including back up to the opposite hillside where one of the Tibetan villages sits. 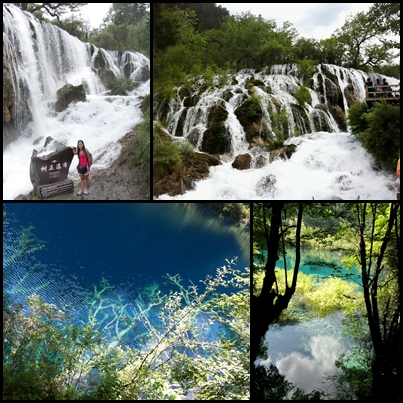 I took a break while Esther continued on to Sleeping Dragon Lake, then she picked me up and we continued along the walkway back across to the road. This is the section that delighted my parents and I the previous year with the “blue jelly” phenomenon. It’s really fun to have a path that passes along the drop from one lake to another, with waterfalls passing under (and sometimes over) the path all the way along.

It was a long day, and after leaving we stopped for noodles and booked a car to take us to Huanglong in the morning then spent the evening in.

** UPDATE: I did eventually write about our visit to Huanglong (complete with pictures).